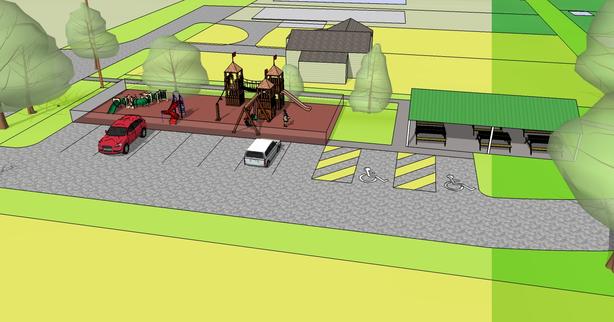 In April of 2015, The Marengo Village Council Park Planning Committee presented a Parks & Recreation Plan to The Marengo Village Council.  The plan was presented by Mayor Mike Baker, and Council members Earl Bennett & Ronald E. Margraff.  The plan addresses a need for providing recreational opportunities and access to public space for the residents of Marengo and surrounding areas.

The Village of Marengo historically relied on the Highland Local School District to provide recreational opportunities for village residents and those in the surrounding area on their elementary school campus in the Village. The elementary school was recently closed and school facilities are now located 6 miles east of the Village, outside of Sparta. The school was purchased by a private party, resulting in no public playgrounds or outdoor shelters within a 5 mile radius of the Village.

It is anticipated that the majority of park users will be associated with the Lowell Highland Sports Association (http://hsabaseball.com/) which holds events on the fields adjacent to the subject property. This property will become a major access for the adjoining baseball fields which are currently accessed from an under-improved public roadway (Williams Street) beside the old school.

The chosen property is located at 56 West Walnut Street, Marengo, Ohio 43334. The site is roughly 82 feet wide by 330 feet deep and 0.64 acres in area. The site was acquired by the Village in 2012. It provides a unique opportunity to connect Walnut Street and Williams Street, providing better access to the contiguous baseball fields and parking lot that are leased by the Lowell Highland Sports Association and actively used by youth.

The park planning effort is intended to exemplify the latest National Accreditation Standards sponsored by the National Recreation and Park Association (NRPA). Because of the park’s proximity to other existing active recreation and the future ability to expand this park in the immediate area, the Village plans to use NRPA’s park, recreation, open space and green way guidelines for neighborhood park development. It was determined that the following amenities were of preliminary interest to stakeholders and would be primarily considered in the planning effort:

The committee was open to considering additional amenities if they were mentioned by multiple stakeholders throughout the planning process.

A public survey was conducted by the Park Planning Committee. A total of twenty-five (25) responses were received. Eighty-eight percent (88%) indicated that they would use parks if additional amenities are offered. The following indicate the response of these surveys and public comment received during a town hall meeting held in Village Hall on Monday, April 20, 2015 at 7:00 p.m. The most popular amenities were basketball court, benches, children’s playground, picnic tables / grills, restrooms, shelter house / pavilion and trails.

Any and all park improvements shall be designed and maintained to be free of obstructions to disabled individuals and compliant with Americans with Disabilities Act (ADA) standards. Not only does this ensure accessibility to all, but limits potential liability for misuse of equipment and infrastructure. Any signage will be provided in English, Brail and Spanish interpretations. Extra efforts shall be made to include accessible swings, picnic tables and vehicular access.

The following park plan was developed as a product of site suitability and public comment. This plan includes a gravel drive that connects Walnut and Williams Streets with 30 parking spaces. This includes 450 foot of sidewalk extension, two concrete ADA parking spaces, a 24’ by 44’ shelter house on a concrete pad and a 30‘ by 80’ fenced playground.

The playground can provide safe play, designed for 32 children at one time at 75 square feet per child.

The shelter house can house six (6) six foot long picnic tables, including one ADA table to facilitate 24 visitors comfortably. If designed with some rural characters, like a cupola and at a residential scale, it can blend in well with the neighboring properties. If placed in close proximity to the playground the shelter can also be used as an area for parents to monitor their children on the playground while gathering and socializing with other parents and neighbors.

By design 30 parking spaces can provide for full use of these amenities as well as some use of the common open space. From the southern entrance off Walnut Street, these amenities will be well screened by the parking and some additional trees.

From the northern Williams Street entrance, the playground and shelter will be easily accessed by those that are visiting the adjoining baseball fields. The stubbed sidewalk connection will help to separate pedestrian and vehicular traffic.

A 20 foot wide drive and 90 degree parking will also help to ensure a safe environment for park users. Future phases of development can include playground upgrades, further tree plantings and eventually paving the parking and driveway.

Funding and contributions for this project should be secured by the end of 2015, with the anticipation of breaking ground in the spring of 2016.

Park facilities should be open from sun-rise to sun-set. The park will not be staffed by personnel. Park rules will be established by Village Council and enforced by the Morrow County Sherriff’s Office. The Village of Marengo employs maintenance personnel who is charged with the care of Village lands, buildings, roads and utilities. 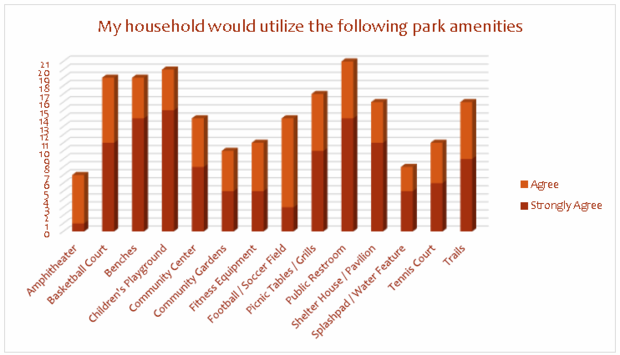 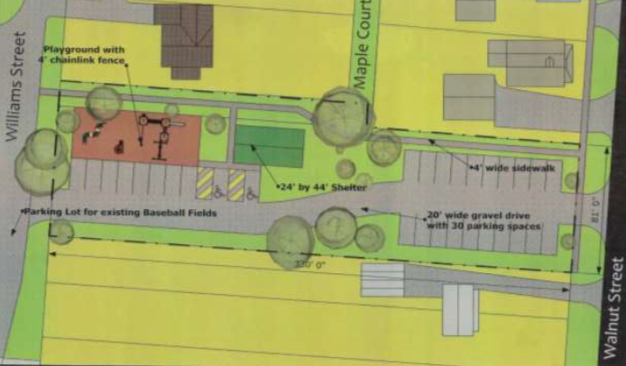 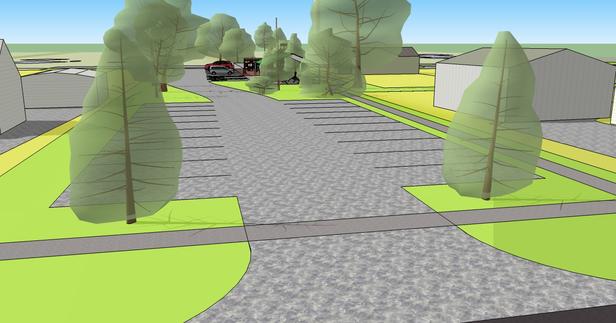 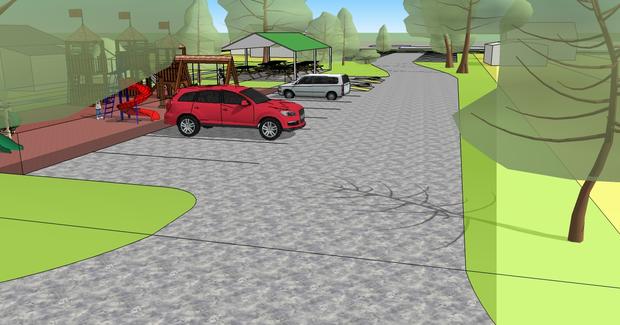